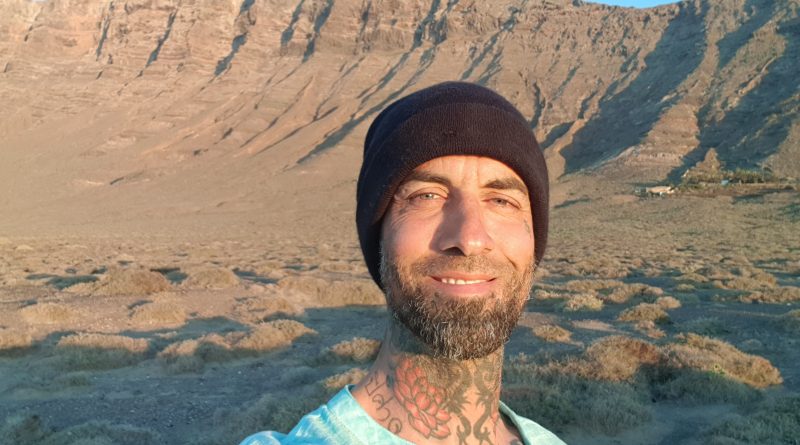 German guitarist, singer and songwriter Nader Rahy recorded the video for his new song “I’m not alone” in Lanzarote. It shows some of his favorite places on the island, including Famara, La Santa and Soo. Away from the tourist spots, Nader not only appreciates the island for surfing and exchanges the cityscape of Berlin for sun and beach in Lanzarote as often as he can.

In Germany, Nader has long made a name for himself as a long-time guitarist for Nena and through numerous own music projects. In 2013, he was also able to demonstrate his singing talent several times on television in the third season of “Voice of Germany”.

Since the all-round musician also plans to spend more time in Lanzarote in the future, he has also turned to us to present him and his video, which we are of course very happy to do. We also took the opportunity to ask Nader Rahy a few personal questions.

I generally travel a lot and have been passionate about surfing for seven years. I actually discovered Lanzarote one evening while taking a “walk” on the world map via GoogleEarth. Then I just flew there and fell in love immediately. I love the peace, the strength of nature and the climate.

2) What are your favorite spots on the island?

I really like Famara with its long beach. The mountain range is extremely impressive. Orzola is also very beautiful with its beach. I also enjoy surfing in La Santa and on the east side, at the spots around Jameos Del Agua. I really like the less touristy north more than Puerto del Carmen or Playa Blanca. Of course, Timanfaya is also indescribably beautiful.

3) Why did you shoot your video on the island?

Because I personally have a lot in common with the island. I want to live here one day and of course the landscape with its special light makes a lot of things.

4) Is “I’m not alone” your first own production?

No, I’ve written a lot of songs, produced a lot of albums and made a lot of videos. “I’m Not Alone” is the first single of my new musical era, which is also inspired by Lanzarote.

5) Is there a band project and are there more songs coming?

Yes, I recorded all the instruments track by track in the studio alone, but there will be a band for live shows. I will be releasing a new single every month for the period of this year. At the end of the year, the whole will form a complete new album, which will be called “IAMLOVE”. However, I also play living room concerts on a small scale and therefore come to the people’s home with my acoustic guitar. I go everywhere and you can directly contact me e.g. Write to Facebook and book. I’ve played hundreds of such gigs in the past few years.

6) How long have you been playing with Nena?

I have been playing guitar with Nena for 18 years now and I will definitely continue to do so for a few more years.

7) Have you been involved in songwriting with Nena?

Yes, in some albums I and the other musicians in the band were involved in writing the music. However, it was a few years ago for me.

8) Will you give a concert on the island?

I once played a few songs in the “Palmera” in Teguise and would love to play more on the island and also think that this will happen.

As announced, we will certainly hear and see even more from Nader Rahy in Lanzarote in the coming months. Either at one of the surf spots on Lanzarote or on one of the stages on the island.

And if someone invites him to a “living room concert” on Lanzarote, don’t forget to let us know. For live music, we are happy to accept any path.